The Case for Macrodosing – Shelby Hartman for Rolling Stone 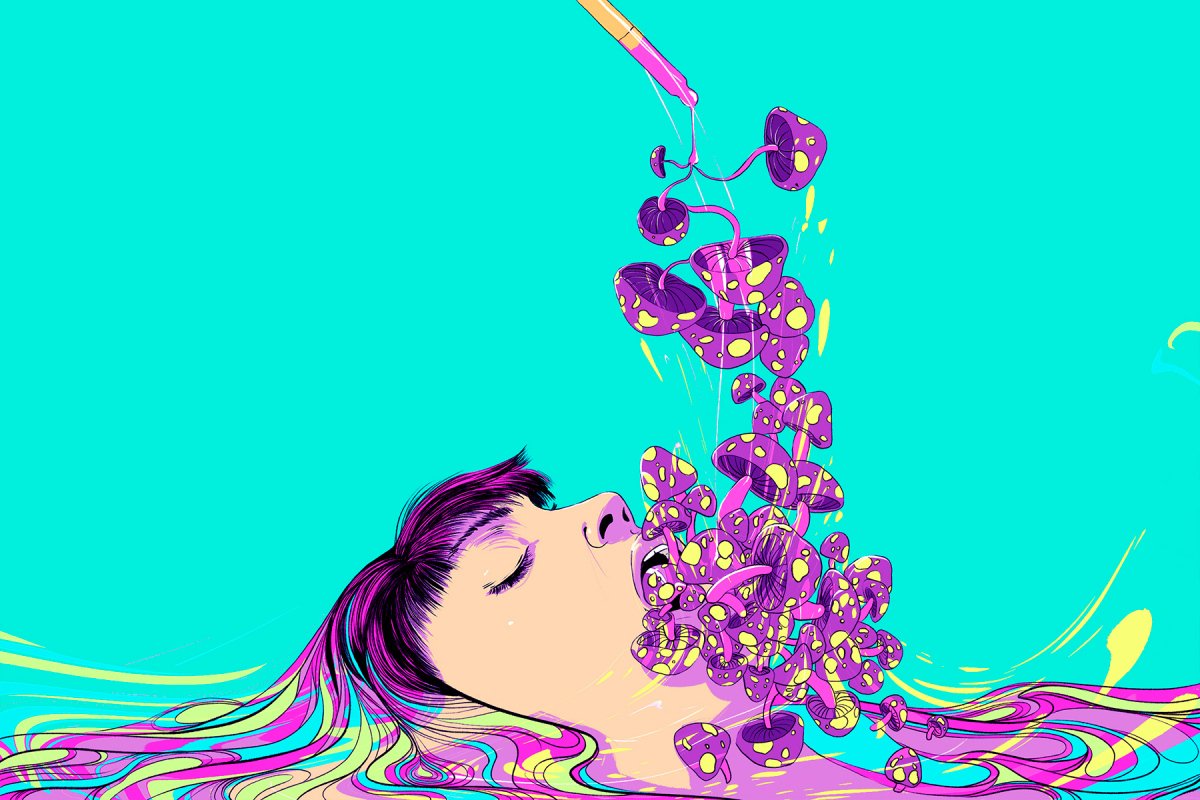 Microdosing, where people take miniscule amounts of substances to change patterns of behavior, has brought psychedelics to the mainstream. But is there more to be gained with a much higher dose?

Would you care for a drop of LSD in your morning tea? A capsule of psilocybin-mushroom dust with your daily vitamins? Such is the daily regimen for those who’ve taken up microdosing, reporting anecdotally just how much this new psychedelic trend has changed their lives. Over the past decade, researchers have delved into how taking small amounts of psychedelics help people combat depression, trauma, attention deficit disorder, and even physical pain. Indeed, author Ayelet Waldman wrote a New York Times bestselling memoir about it, A Really Good Day, while researchers like James Fadiman are among the most sought after voices, educating the newest generation of “psychonauts” about the wonders of psychedelics — albeit in miniscule, sub-perceptible doses.

But, can you really call yourself a “psychonaut” — a savvy explorer of psychedelic terrain — if you’ve never actually tripped? It’d be like saying you know what weed is like, even if you’ve only ever tried CBD. The data is limited, but, so far, it appears as though microdosing works for as long as a person continues taking microdoses. It can affect their mood and health which, of course, can also affect how they treat themselves and others, but doesn’t typically lead to massive, long-lasting transformations in personality and ideology, the way tripping might.

And so, we arrive at the debate over microdosing versus macrodosing, or simply, well, dosing. Is one approach inherently better than the other? What are the benefits and drawbacks of each? And if you’re new to psychedelics, is it better to dive into the deep end, or to just get your toes wet?

For decades, people primarily started by diving into the psychedelic deep end — microdosing just wasn’t something being widely discussed in our culture. But as microdosing has grown in popularity, more people are opting to start out with the latter, unsure of whether they’ll ever fully trip. Both our  introductions to psychedelics began with an eighth of psilocybin mushrooms, or just over three grams of the dried out magical fungus that smelled like feet. We washed them down with orange juice, which psychedelic lore told us would enhance the experience. (And yes, citrus is proven to do just that.) Early on in our psychedelic experience, it never occurred to either of us that mushrooms could engender an experience short of swirling, kaleidoscopic patterns and a six-hour trip. Take less than the standard dose of 3.5 grams? But why?

Intention is everything. The higher the dose, the more likely you are to experience ego dissolution or an out-of-body sensation. This can be transcendent, spiritual, and healing — but can also be terrifying without the proper guidance or context. Psychedelics dampen a part of the brain called the Default Mode Network; when this region is put to rest, the boundaries of one’s self in relation to the rest of the world come down. It’s at this point that we can experience a mystical sense of oneness and can more easily break old thought patterns or addictions. This is in part why psychedelic research at institutions like New York University or Johns Hopkins has shown such great promise in administering full doses to subjects looking to treat anxiety, addiction, and other ailments.

On the other hand, without the proper context, prior education, or set and setting — one’s internal mindset and their external environment — a full dose trip might be too much for some people; after all, not every new psychonaut is a wide-eyed Berkeley college kid versed in Aldous Huxley and Ram Dass, seeking, to put it bluntly, to trip balls. A newbie is more likely to have a safe, positive experience when a trip sitter or psychedelic guide is holding the space. The quality of one’s set and setting will make or break a psychedelic experience. That’s not to mention the risk of psychosis or triggering schizophrenia, if you have an underlying mental condition.

So that brings us to the idea that some new psychonauts may indeed want to “start low and go slow,” as they say in the psychedelic community. After all, you can always take more, but you can never take less. In the case of microdosing for therapeutic reasons, the concept is that the psychedelic can offer you shifts in perspective, the way a bigger dose might, without requiring you to spend a full day tripping, something many people might not have time for or, simply, might just be afraid to do. It can also be a good way, some psychonauts say, of acclimating to the idea of taking a psychedelic before you macrodose.

The research into how microdosing works neurologically is limited, but, according to a database of more than 1,500 reports collected by Fadiman through his microdosing website, people report that microdosing can in subtle, but important ways impact how they move through their day — they say they just feel lighter, more appreciative, more observant, more creative, or more grateful, among other effects. Fadiman gives examples, informed by these reports, such as, on a day when microdosing, you might habitually reach for those chips or that glass of wine only to realize that you’d genuinely rather have a salad or cup of tea. Microdosing can just provide a bit more awareness or flexibility around changing unhealthy patterns.

“There’s a spectrum of experience: It’s definitely valuable to go all the way in, but it depends on the scenario,” says Mike Margolies, activist and founder of Psychedelic Seminars. “If I’m trying to have a mushroom experience that is healing and therapeutic and I’m trying to get insights, then I probably want to do a higher dose, but if I just want to use psychedelics socially and hang out, then maybe a threshold dose” — about .25 to 1 gram, or just over a microdose — “is more appropriate.” And not to mention, he adds, you can get insights from this lighter dose, too, “when you have the window just slightly cracked open, but you’re not totally in the full-on mystical or psychedelic experience.”

To be clear, psychedelics are not a panacea: Taking a full dose is not a magic bullet, and neither is microdosing. The key is integration — incorporating psychedelic insights into daily life, whether that means practicing meditation to increase mindfulness or implementing a major life change like ending a relationship or switching careers. And if you’re keen on microdosing, there’s nothing wrong with simply seeking a ‘lil pep in your step to better flow through the day.

So while many seasoned psychonauts agree that the journey is the medicine — that getting through a trip provides insights that wouldn’t otherwise be had — there is no right or wrong answer to the microdosing versus macrodosing debate.

But there is a caveat to note, and that’s the gentrification of psychedelic culture, through an emphasis on microdosing. When CBD got big, many of us hailing from pre-legalization (i.e. pre-mainstream) pot culture argued in favor of the “case for keeping cannabis weird.” Sure getting high isn’t for everyone (although anyone may be a candidate for the therapeutic effects of cannabis, such as through CBD or even microdosing THC), but that doesn’t mean we should stigmatize those who do get high, in an effort to sterilize the culture and make it more palatable to the mainstream. The data has shown there’s value in macrodosing — in having profound, classic psychedelic experiences — and so many longtime psychedelic advocates simply don’t want to see that get lost.

And so, in that may lie the answer to the microdosing versus macrodosing debate. The answer itself is completely objective and highly personal: If psychedelics are indeed sacred and yes, certainly powerful, what kind of experience will engender, for you, the most long lasting benefit?

Warning: Invalid argument supplied for foreach() in /home/customer/www/doseosmosis.com/public_html/wp-content/plugins/email-subscribers/lite/includes/classes/class-es-forms-table.php on line 729