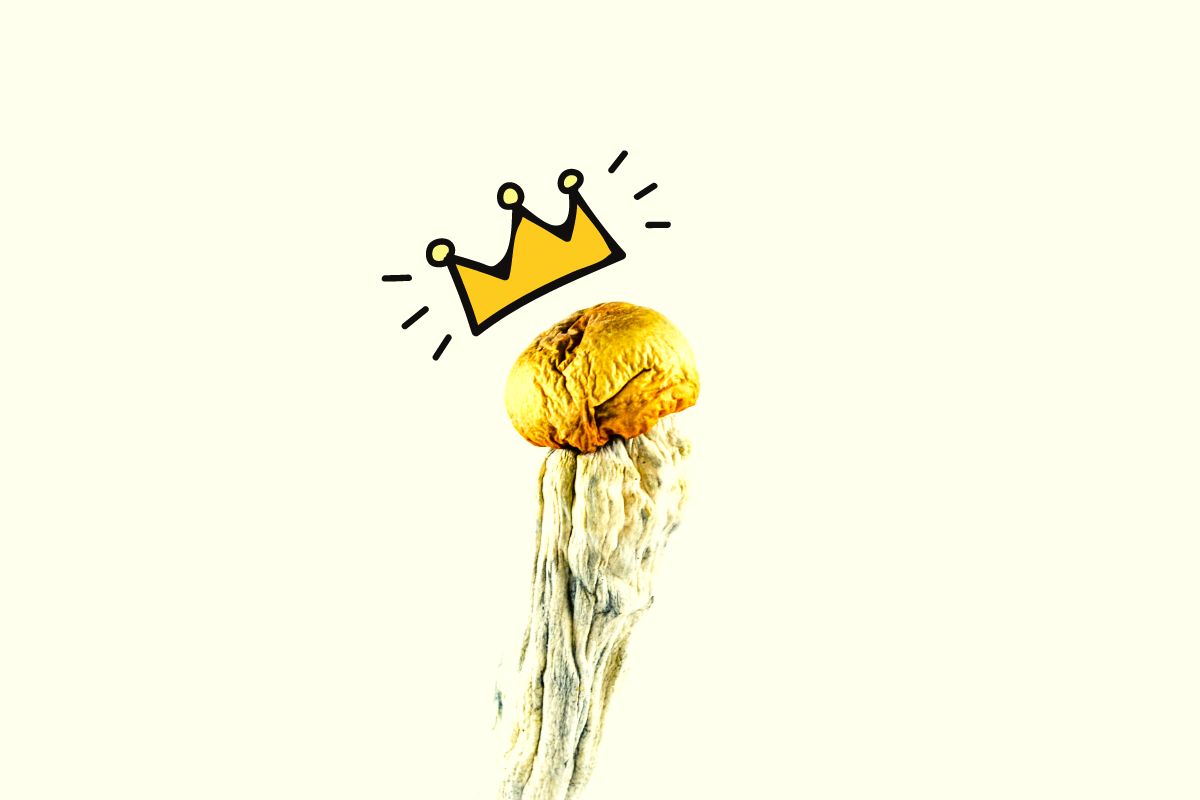 Penis Envy are often favourite for their strength and effects. They have a higher potency than most other mushrooms due to their high psilocin content. On average, Penis Envy mushrooms are double the strength of Golden Teacher mushrooms.

The peculiar-looking Penis Envy magic mushroom is a favourite among those looking to delve deep into the psychedelic realm. It has a complex history, including its expansion into many sub-variant strains.

Effects: what to Expect

Penis Envy mushrooms have a higher potency than other magic mushrooms. Experts theorize that this is due to a high ratio of psilocin to psilocybin, which are hallucinogens that alter the action of serotonin in brain tissue. Psilocybin differs from psilocin in having a phosphate group attached to the molecule at the oxygen atom. When psilocybin is ingested, it must be dephosphorylated by the liver before it turns into psilocin, and the psychedelic effects can be felt. The higher the psilocin content of a mushroom strain, the greater the potency.[2]

Partakers of this magical mushroom experience report strong, wavy visuals during their trip. Feelings of euphoria and profound introspectiveness accompany this. This mushroom does not result in much of a body load and makes users feel light, energetic, and unencumbered.

Those who partake experience a variety of mind-altering and spiritually healing effects. The healing qualities of Penis Envy magic mushrooms have led to their use in medicine.

How do they look and grow?

The mushroom has a thick, dense stem that is usually off-white. Though shorter and smaller than other mushrooms, it makes up its weight in denseness. It is recognizable by its underdeveloped bulbous cap. The top of the mushroom looks unusual because this particular mushroom lacks a “velum” – the veil separating cap and stem – which often leads to a bubbling mutation just below the cap.

Penis Envy will generally not drop any spores. Instead of producing and dropping spores, the fruits develop mutative growths in the stem, usually just below the cap. This lack of velum makes the mushroom difficult to harvest because growers can’t tell the usual sign of the veil tearing.

Where does the name come from?

The history of the Penis Envy strain is long and convoluted. It was initially discovered in the Amazon Rainforest by Terrence McKenna, a well-known botanist, and psychonaut. After bringing it back to the US, McKenna gave it to Steven Pollock, who then cultivated the strain of cubensis into what is now known as the Penis Envy magic mushroom.

Pollock saw the benefits of using psilocybin in health care and aimed to open up the first legal mushroom cultivation and research laboratory that could prescribe and treat patients.

To obtain the massive finances for his goal, Pollock had a few illegal business practices and was under the watch of local authorities and the DEA. When Pollock was suspiciously murdered and his research went missing, the police barely looked into the crime because of his reputation.[1]

Ingesting magic mushrooms has many benefits. While it can improve focus, increase energy, and lead to heightened cognitive benefits, these mushrooms can also treat serious health conditions, such as depression, and help manage alcohol and smoking addiction.

Whether it is in micro or macro dose form, users report that they are gifted with better focus, increased concentration, and more mindfulness when taking magic mushrooms. They suggest that it gives them more energy, that they feel more awake, and they report feeling stimulated. It has also been proposed that taking magic mushrooms can increase cognitive benefits, such as enhanced problem-solving.

Depression is one of the main illnesses that is treated with psilocybin therapy. Scientific American magazine printed the results of a controlled trial this year, showing that psilocybin therapy may work as well as common antidepressants. The participants also reported fewer side effects.[3]

All in all, Penis Envy magic mushrooms are a fantastic strain. They are a little strange looking and challenging to harvest, but their potency is unmatched in the mushroom world. They will only continue to reveal their benefits as we do more research and treatments!

If you are interested enjoying the many fascinating benefits decribed here, consider trying out Penis Envy Magic Mushrooms, or our Penis Envy Scooby Snacks. Find these products below!

Warning: Invalid argument supplied for foreach() in /home/customer/www/doseosmosis.com/public_html/wp-content/plugins/email-subscribers/lite/includes/classes/class-es-forms-table.php on line 729